33 years old and world No. 1 Serena Williams, wins compatriot 19 years old Madison Keys to qualify for the finals of the Australian Open after five years, in straight sets 7-6 6-2. Williams who had some difficulties in the first set against the very talented and hard knocking Ms Keys said, she “was just happy to get through it today.” Keys had 8 more winners to the No. 1’s nineteen, 12 Aces almost equalling her opponent’s 13; But Serena’s apparent experience, forced her young opponent into making 23 unforced errors more than the No. 1, thus hooking the game to her advantage. La Williams was clearly the better player today, but Madison established that she was a force to reckon with in the future. 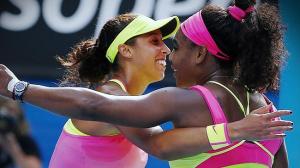 Their game ended in a friendly warm big/small sister hug, that made for one of AO 2015 moments.

Meanwhile earlier on, Maria Sharapova, the most photographed woman in female tennis and world No. 2, won fellow country woman Ekaterina Makarova in straight sets 6-3 6-2 to reach Saturday’s finals against Serena Williams.The last time Shazza beat the American was in 2004, on their first encounter in Wimbledon finals and later that year in the WTA Tour Championships. Ever since, Shazza has been no match to the American, who won the Russian in their next 14 encounters, making a record win of 16:2 against her. Tomas Berdych broke a 17-0 winning streak against Rafael Nadal on Tuesday, winning the Spaniard for the first time in 18 encounters. Can we look out for the same with Maria; is it time for her to break the 14 successive hold La Williams has on her? Watch out for the Finals on Saturday in Melbourne Parks, with both women fighting to hold the number one spot and Serena hoping to clinch her number 19 Grand Slam title. 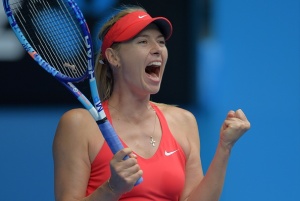 Andy Murray wins Tomas Berdych 6-7(6) 6-0 6-3 7-5 to qualify for his fourth Australian Open finals. After the match, the Scot went on to say “to be in the final four times here, I mean, because I’m surrounded by guys like Roger, Novak and Rafa, doesn’t look like much, but that doesn’t happen that often. So I’m very proud of that.” He faces either Novak Djokovic or Stan Wawrinka who have their semi-finals showdown on Friday night.

About The Last Immigrant

The Last Immigrant is about writing - writing all about journeys, passion, perception(s). It is about leaving home and travelling beyond, over the seas and above the horizons; of experiences in the foreign and the unknown. Of my view, her view, their view, our views. An enthusiast reader of books, fiction and non-fiction alike, books and stories have been an integral part of my life from the time I was about 8 years old. My passion for literature accompanied me all my life through school and university. With me, you can discuss books from all eras and genres, be it the classics, post-colonial, Victorian, Comedy, Tragedy, Contemporary etc. I don’t limit myself in the world of books. My preferences are the Novel and Short story, but bring on Drama or poetry and I will give it a go. I will be sharing a lot about books in this blog. Books I have read, my take on them, recommendations from me, friends etc. You can follow me on Book Read to see what I am currently reading. I sometimes write short stories and poetry. I will be sharing some of my stories on this blog. Being a mom of 2 teenagers, it is difficult to delve full time into writing; but I try as best as I can to create time for this alongside juggling family and work life. Hope you enjoy the stories. Sports, oh boy, don’t I love sports. I am an avid lover of tennis, football and Formula 1. My favourite tennis players happen to be Serena Williams and Rafael Nadal. I will go sleepless nights singing praises for my beloved FC Bayern München. In car racing, no one drives a car like Lewis Hamilton. You will be getting my take on these great athletes and many others on these pages. Travelling happen to be one of my hobbies as well. I will try and share with you some of the interesting places I go to with a literary twist to it. All in all, you will be getting just about anything that ticks Mbole. I hope you enjoy the blog and please leave comments and notes. Have a pleasant ride in The Last Immigrant’s world and thoughts. Thank you for passing by. Mbole D Nnane The Last Immigrant.
View all posts by The Last Immigrant »