The 2015 African Cup of Nations is the 30th edition of the tournament and is being held in Equatorial Guinea (17 January to 8 February). Morocco was the initial host of the tournament but refused to host at the planned dates because of the Ebola Virus breakout in West Africa. 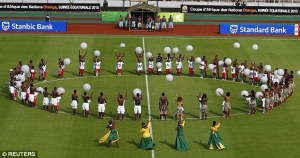 Short History
Africa’s main elite football tournament, the African cups of nations, officially CAN (Coupe d’Afrique des Nations), also referred to as AFCON, was first held in 1957, with only three teams participating – Egypt, Sudan and Ethiopia. CAN’s sanctioning body is the Confederation of African Football (CAF). Since 1968, the competition takes place every 2 years.

The number of participating countries in the final tournament is 16, after having gone through a qualifying stage. 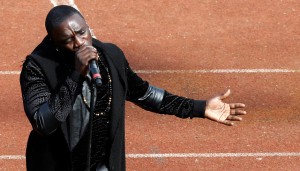 14 Nations have won the tournament since its creation, with Egypt having the most wins, a record 7 championship titles. Ghana and Cameroon have won 4 titles each, Nigeria 3 and the DR Congo 2. Single title holders are Ivory Coast, Tunisia, Congo, Zambia, Algeria, Sudan, South Africa, Morocco and Zambia. 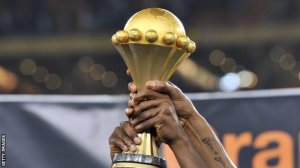 Trophy
There have been 3 different trophies awarded to the winners throughout the competition. The Abdelaziz Abdallah Salem Trophy, named after the first CAF president, Egyptian Abdelaziz Abdallah Salem, was handed permanently to Ghana in 1978 as the first 3 times winner of the tournament. The second trophy, the Trophy of African Unity or African Unity Cup, was handed permanently to Cameroon after they became 3 times champions in 2000. In 2001, a new gold-plated trophy was revealed. Cameroon was the first nation to be awarded this trophy after they won in 2002. Unlike previous winners who took the trophy home permanently, Egypt was presented with a special full size replica after winning three consecutive titles with their 2010 win.

As of 2013, the tournament was switched to being held in odd-numbered years so as not to clash with the FIFA World Cup

AFCON 2015
AFCON 2015 is taking place in Equatorial Guinea from 17 January to 8 February. 16 Nations are partaking in this event, divided into four different groups. The host country Equatorial Guinea, saw a draw on the first day of the event against Congo (1:1) in a packed full stadium of enthusiastic football fans. Equatorial Guinea captain Emilio Nsue (R) Lopez scored the tournament’s first goal in the 16th minute then had a goal disallowed for offside in the second half. The Congo struck through Thievy Bifouma in the 87th minute to force a 1-1 draw. The 2nd game, Burkina Faso vs. Gabon ended in a 0:2 win for Gabon, with Dortmund’s Aubameyang scoring the leading goal in the 19th minute. Day 2 of play saw only draws between Zambia vs D.R. Congo (1:1) and between Tunisia vs Cape Verde (1:1) 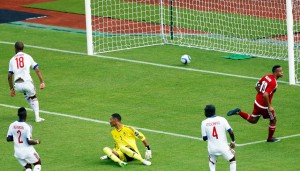 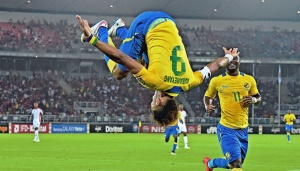 Group C and D will be playing on the 19th and 20th respectively. 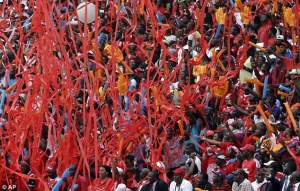 Equatorial Guinea fans enjoying the festivities at Bata Stadium during the opening ceremony.

Keep coming for a daily summary of all the matches. 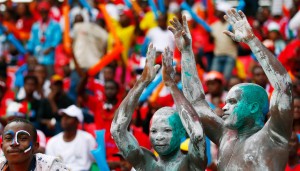 Equatorial Guinea fans enjoying the festivities at during the opening ceremony

About The Last Immigrant

The Last Immigrant is about writing - writing all about journeys, passion, perception(s). It is about leaving home and travelling beyond, over the seas and above the horizons; of experiences in the foreign and the unknown. Of my view, her view, their view, our views. An enthusiast reader of books, fiction and non-fiction alike, books and stories have been an integral part of my life from the time I was about 8 years old. My passion for literature accompanied me all my life through school and university. With me, you can discuss books from all eras and genres, be it the classics, post-colonial, Victorian, Comedy, Tragedy, Contemporary etc. I don’t limit myself in the world of books. My preferences are the Novel and Short story, but bring on Drama or poetry and I will give it a go. I will be sharing a lot about books in this blog. Books I have read, my take on them, recommendations from me, friends etc. You can follow me on Book Read to see what I am currently reading. I sometimes write short stories and poetry. I will be sharing some of my stories on this blog. Being a mom of 2 teenagers, it is difficult to delve full time into writing; but I try as best as I can to create time for this alongside juggling family and work life. Hope you enjoy the stories. Sports, oh boy, don’t I love sports. I am an avid lover of tennis, football and Formula 1. My favourite tennis players happen to be Serena Williams and Rafael Nadal. I will go sleepless nights singing praises for my beloved FC Bayern München. In car racing, no one drives a car like Lewis Hamilton. You will be getting my take on these great athletes and many others on these pages. Travelling happen to be one of my hobbies as well. I will try and share with you some of the interesting places I go to with a literary twist to it. All in all, you will be getting just about anything that ticks Mbole. I hope you enjoy the blog and please leave comments and notes. Have a pleasant ride in The Last Immigrant’s world and thoughts. Thank you for passing by. Mbole D Nnane The Last Immigrant.
View all posts by The Last Immigrant »